There’s dialogue from a script of a television show called “The Cleaner” Season 1 Episode 12. It’s the five words at the end that really gave me an understanding of the disappointment, guilt and shame addicts go through to get to the point of saying these five little words and it hits close to home:

“There are five words that are part of every addict’s vernacular. Five words that come from the darkest place imaginable, but these five words don’t mean surrender or defeat. To call it defeat would oversimplify the absolute loss of humanity. This is it… the disintegration of the soul, the point at which the body has no fire left, when helpless becomes hopeless and hopeless becomes despair. This is the moment in the game where there are no more places, no more outs, no more options. This is the place every addict eventually gets to. The thought of living our lives without our addiction is unthinkable, even worse than the thought of living our lives with it. So when we say these five words, it doesn’t come from a place of fear, it doesn’t come from a place of sadness, it comes from the core of our soul, the burning-out center that has begun to go cold, the place where nothing lives except the truth. These five words… so simple… five little words… ‘I wish I were dead…’”

We all hear the stories of addicts who almost completely ruin their lives before getting sober. They’re secretly chugging bottles of vodka, filling up that syringe just to feel better, stealing, or crashing cars. Just continuously putting themselves into incredibly dangerous situations.

For someone who is close to me, it started at thirteen years old; casually stealing beers, wine coolers, or whatever he was able to get his hands on and binge drinking by the time he was seventeen. The progression was slow, but the writing was definitely on the wall. He didn’t come from a hard life (except an alcoholic father, in denial) he came from a loving family, great friends, a good high school experience, and he loved sports- especially footlball. He played since he was eight.
The next five years consisted of his parents divorcing, losing interest in football eventually quit playing his senior year, graduating high school with barely passing grades, withdrawing from college classes (because he was too hungover to go), heavy drinking, blacking out and doing it al over again. Every day.

Since he hung out with an older crowd there was an easy access to pain killers- he would dabble with the occasionally and smoke marijuana. He felt like the life of the party. At nineteen he left a friend’s house after a night of drinking and “taking a shot for the road.” He got his first DUI and crashed his moms car trying to evade the police that night. He uttered the words “I wish I were dead” in the hospital that night. None of that stopped or scared him enough though. Now instead of going to parties because he wasn’t allowed to drive, the parties came to his house because his mom was gone on the weekends. When there wasn’t a party he would instead drink alone, in his room.

Fast forward to twenty four years old. Those same words were said again, “I wish I were dead.” He didn’t want “that” life anymore, and decided to do something about it. He started calling every day for two weeks to see if a bed was available at a state funded facility for detox and treatment. He finally got in and spent his next thirty five days there. After a successful completion he was back home is full recovery mode; attending AA seven days a week (sometimes three times a day), working a full time job and staying active in the program. He had surrendered.

Ten months sober his sponsor relapsed and passed away and all his hope was gone. He decided one drink wouldn’t hurt and picked up that bottle again. As he snuck around for the next two months claiming to be sober, his family was gaining sense about what was going on (though in denial it would happen again). He started slipping up at and was constantly getting write ups. He was on the brink of termination.

One more month of drinking he was heard in his bedroom punching walls, crying and saying this five little words again “I wish I were dead.” He was dragged to the hospital for a psych evaluation and was found to have a BAC of .483 and was given a small intervention. Fighting any options given to him, he eventually agreed to go for detox and treatment again.
The guy being written about is my brother. I never gave up on him and dragged him to the hospital that day. I sat with him for 28 hours witnessing the DTs and hallucinations. To me he was suffering and I hated seeing my little brother go through that. He was picked up the next morning by ambulance and transferred to detox. It felt like a huge relief to me that he was safe again, but I didn’t feel like I was done taking care of him yet. I drive to his work and fought for him to keep his job and went home to clean his room of all the hidden bottles and beer cans.

Here we are in 2018 and I am so proud to say my brother has almost 9 years of sobriety. He is still active in the program and works at a detox. He completed school and just has to take the state exam to be a drug and alcohol counselor.
With my brothers help I have been able to continue helping others and have been working in a detox setting for over 2 years. Although I’m not in recovery myself I can say I have the family aspect. I’ve seen addiction directly from the sidelines all my life as a daughter, niece, friend and sister. I will continue helping and taking it one day at a time, and I have my brother to thank for saying those five little words and scaring me, “I wish I were dead.” 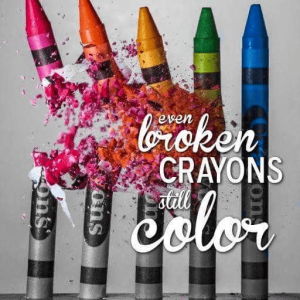